The St. Moritz mineral spring, and thus the origin of the health resort, can be found at the St. Moritz Bath with the health spa centre. At the Forum Paracelsus, the history of the mineral spa is explained which goes back to the 15th century. At the local fountain, one can drink the sour mineral water, which has is known for its healing powers, even before the discovery by Paracelsus. 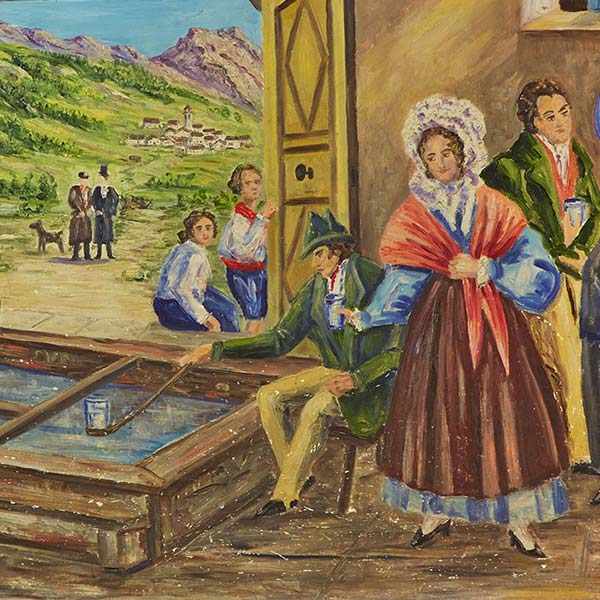 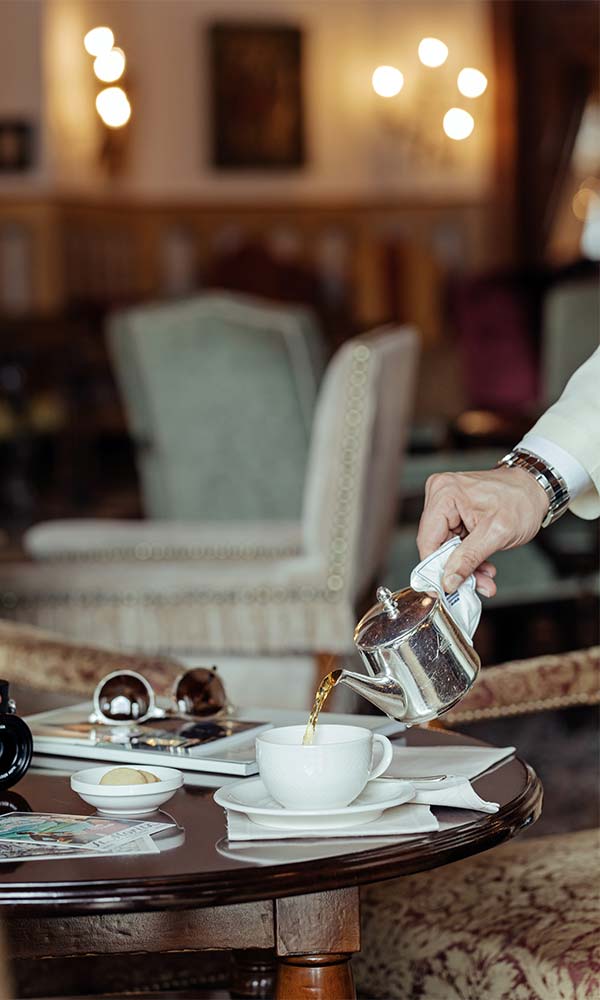 With the Badrutt’ s Palace and the Kulm Hotel, you will find already two representatives of the classic grand hotel trade in close distance. During a walk through St. Moritz, one shouldn’t only take the usual photo in front of the Palace Hotel with its iconic tower but also take some time for a coffee or high tea in the afternoon at one of the cosy hotel lobbies.

You get the allegedly best breakfast of Switzerland at the Kempinski Grand Hotel des Bains and the most beautiful views of the lake at the terrace of the Carlton Hotel.

Genuine art nouveau atmosphere can be enjoyed with a drink at the Reine Victoria Bar.

The English were the first to discover the attraction of the snow and sun-rich winter in St. Moritz and the Engadine. Thus, the winter tourism was born. For over 150 years, they still meet year after year at St. Moritz to escape the grey fog of their home island. Apart from various curling tournaments, also the emergence of the Cresta Run goes back to the winter traditions of the British. This predecessor of the skeleton sport is held in its original form only in St. Moritz. Daring men plunge down head first in the ice channel of the Cresta Run on a metal sledge. But the thrill is also guaranteed for spectators, when “Cresta Riders” come shooting down the ice channel like arrows with up to 140 km/h in their tight full-body suits, only protected by a helmet.

Somewhat more safety you will find with a guest run in the four-person bob on the Olympia bob run directly next door. As the only natural ice bob run in the world. 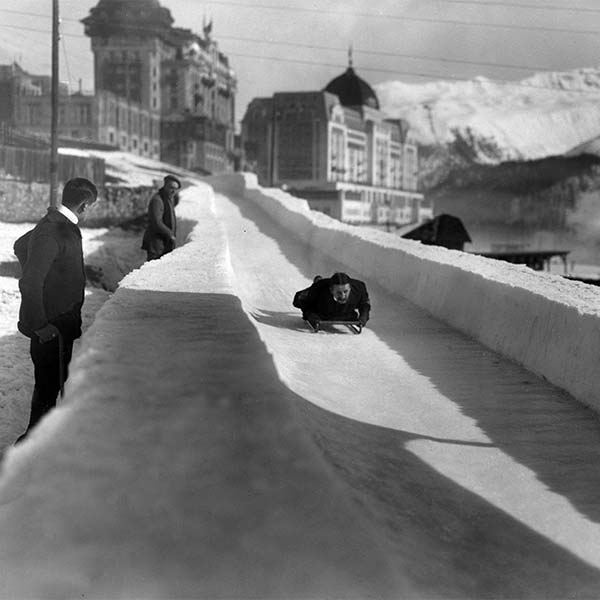 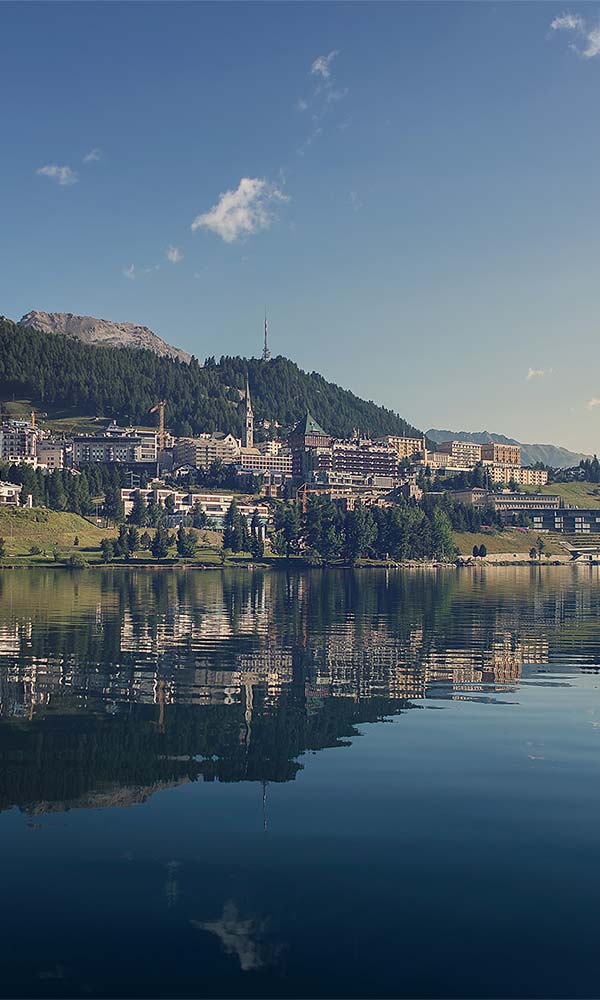 Water is somewhat magic. As a source of life, it draws humans into its spell since the early days of humanity. The Engadine lakes represent without a doubt a very special attraction. A walk around, or in winter, across the Lake St. Moritz is, therefore, an absolute must on the to-do list of every visitor. The distance of approximately 4 kilometers leads past at the Hotel Waldhaus am See, along a shady section of forest in the back of the lake, and past at the Catholic church, as well as the indoor riding arena in St. Moritz Bad. A refreshing break, directly at the lakeshore, offers the restaurant Pier 21 at the Segelclub St. Moritz. For a somewhat extended tour, one can continue at the northeast end of the lake, past the dairy farm and through the Staz forest to Lake Staz and enjoy refreshments at the restaurant Lej da Staz, the probably most idyllic place near St. Moritz.

As a masterpiece of civil engineering and line management, the Rhaetian Railway has earned itself the seal of the UNESCO World Heritage. The railroad line of the Albula and Bernina nestles harmoniously into the landscape and almost merges with its environment. The railway connection does not only open the Upper Engadine to the international tourism but is a tourist attraction in itself. The placement of landscape characteristics along the line has been considered during the building stages. A drive through tunnels and over bridges, along steep rocky slopes, and wooded valleys is a unique experience. If you decide not to arrive by train, you should consider a day trip with the Bernina train. 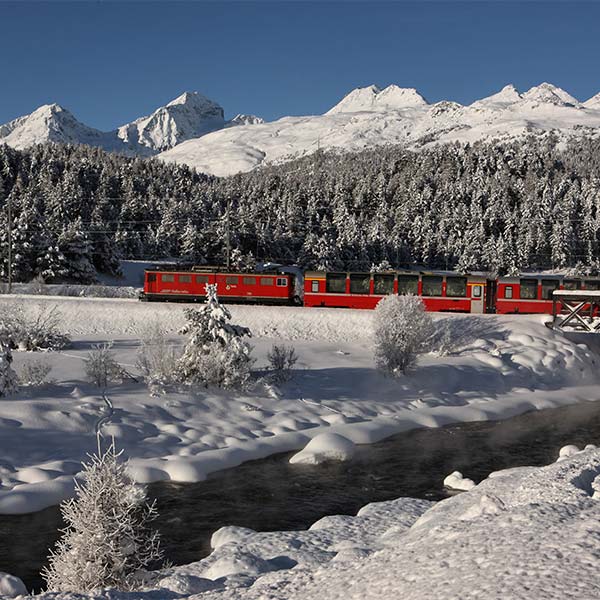 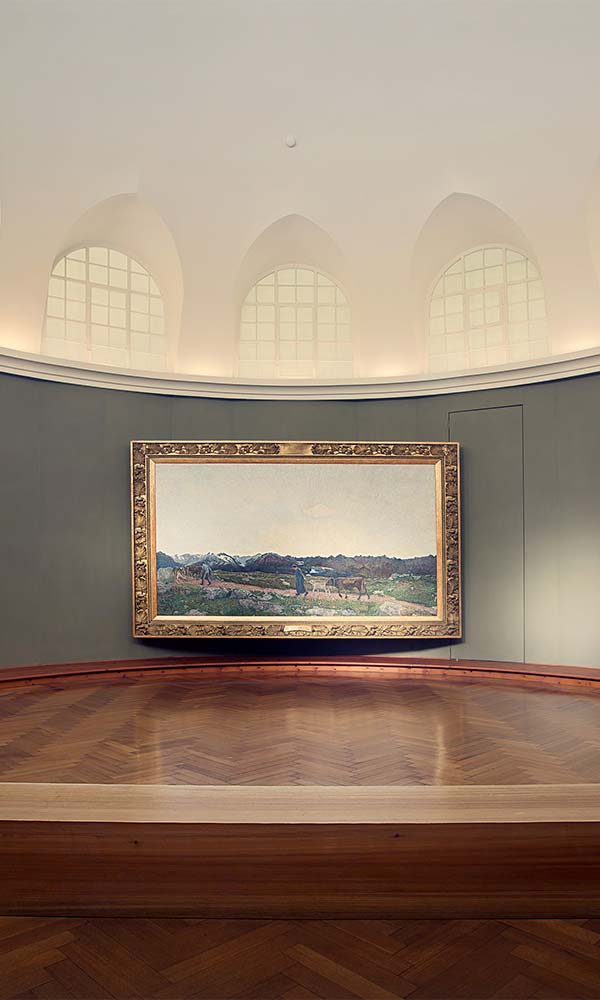 The Engadine served many artists and free spirits as a source of inspiration. Therefore, it is not a surprise that the collections at museums and art galleries are more varied than one would expect at a holiday village in the Alps. One can easily combine an art tour with an architecture walk through St. Moritz and surrounding areas. Many picture motives are reflecting the Engadine mountain panorama, and the diverse flora and fauna of the high valley can be found in artworks.
Apart from internationally well-known names, one does also see the works of less renowned, but nevertheless equally interesting artists and learns about exciting local customs and the history and the pioneer spirit of the high valley.

St. Moritz is not a traditional Engadine village. It is a melting pot of different architectural styles. Its silhouette has a rather urban character, quite contrary to a mountain village. During a walk through St. Moritz, you can visit various exciting buildings of various architectural epochs and styles.

The 33 meters high “leaning tower of St. Moritz” in the village centre is probably, apart from the impressive mountain world, the most striking landmark of the village. Built in 1570 as a tower of the Mauritius church, it has been renovated and re-erected several times over the years and, due to the heavy weight, relieved of its bell. In the meantime without church nave, it still stands tall. With a 5.5 degrees inclination, it even tops its famous cousin in Pisa. 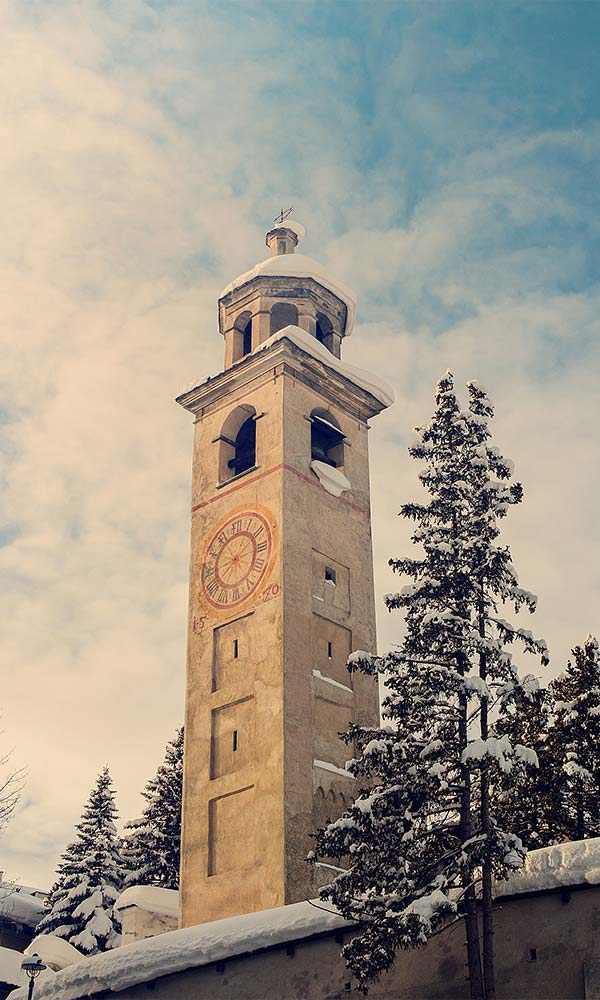 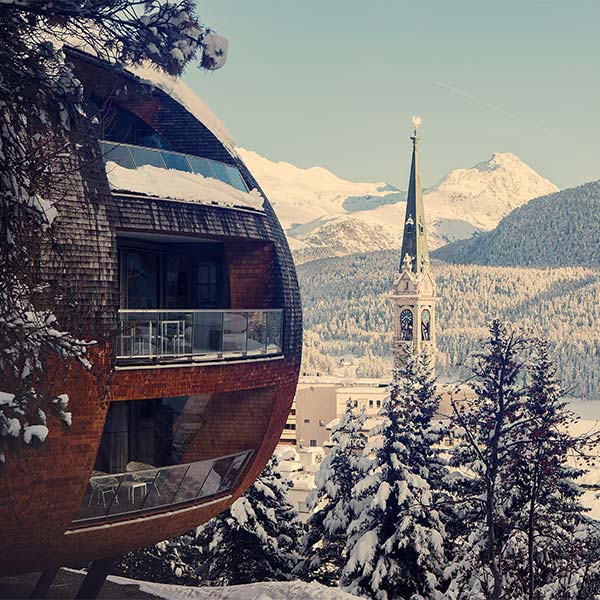 Likewise, one should visit the Olympia stadium from 1928 and 1948, which is now private residence of the designer Rolf Sachs but open to visitors for a tour.

Also the world-known British star architect Lord Norman Foster has immortalised his name in St. Moritz with several buildings. At the Via Serlas, The Murezzan combines historical and contemporary elements. The project contained the renovation of the old Hotel Post and Hotel Albana, as well as a completely new building. The buildings, old and new, form a high-contrast at the shopping street in the centre of St. Moritz. The Chesa Futura is probably the most well-known project of Foster in the mountain metropolis, a spectacular circular building, with a larch wood front and views across the village and Lake St. Moritz. The newest is the renovated and extended Olympic ice pavilion from 1905 at the Kulm Park next to the Kulm Country Club.

You can discover other works of modern architecture in a walk around the Lake St. Moritz. The Oscar Niemeyer Haus of the well-known Brazilian architect resides high above at the mountainside with views over the lake. Or high above at the Corviglia during a hiking trip: The Quattro Bar is as a futuristic ski lodge, and has been awarded the Red Dot design.

In contrast to contemporary buildings are various historic hotels, such as the art nouveau Hotel Reine Victoria, atypical for the Engadine, from the year 1874, or the original health spa hotel next to the mineral spa, today known as the Kempinski Grand Hotel des Bains. The silhouette of the Badrutt’ s Palace Hotel with its iconic tower is, likewise, an indispensable part of the St. Moritz skyline.

Art and architecture can be perfectly combined with a visit at the Segantini Museum. Not only because of the impressive paintings of the artist but also because of the impressive central building. Aligned to the East, the building points towards the Schafberg, the resting place of the artist. Designed by architect Nicolaus Hartmann, the design follows the draft of Segantini for a monumental pavilion as part of his Engadine panorama for the Paris World Exhibition 1900. With the powerful dome, the building feels like an accessible monument, a memorial for the artist. 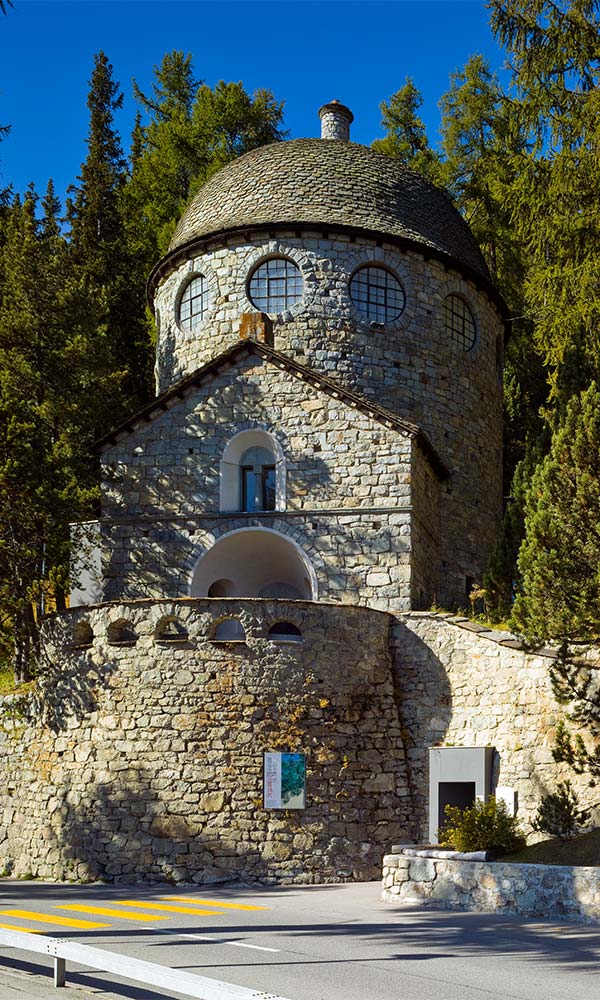 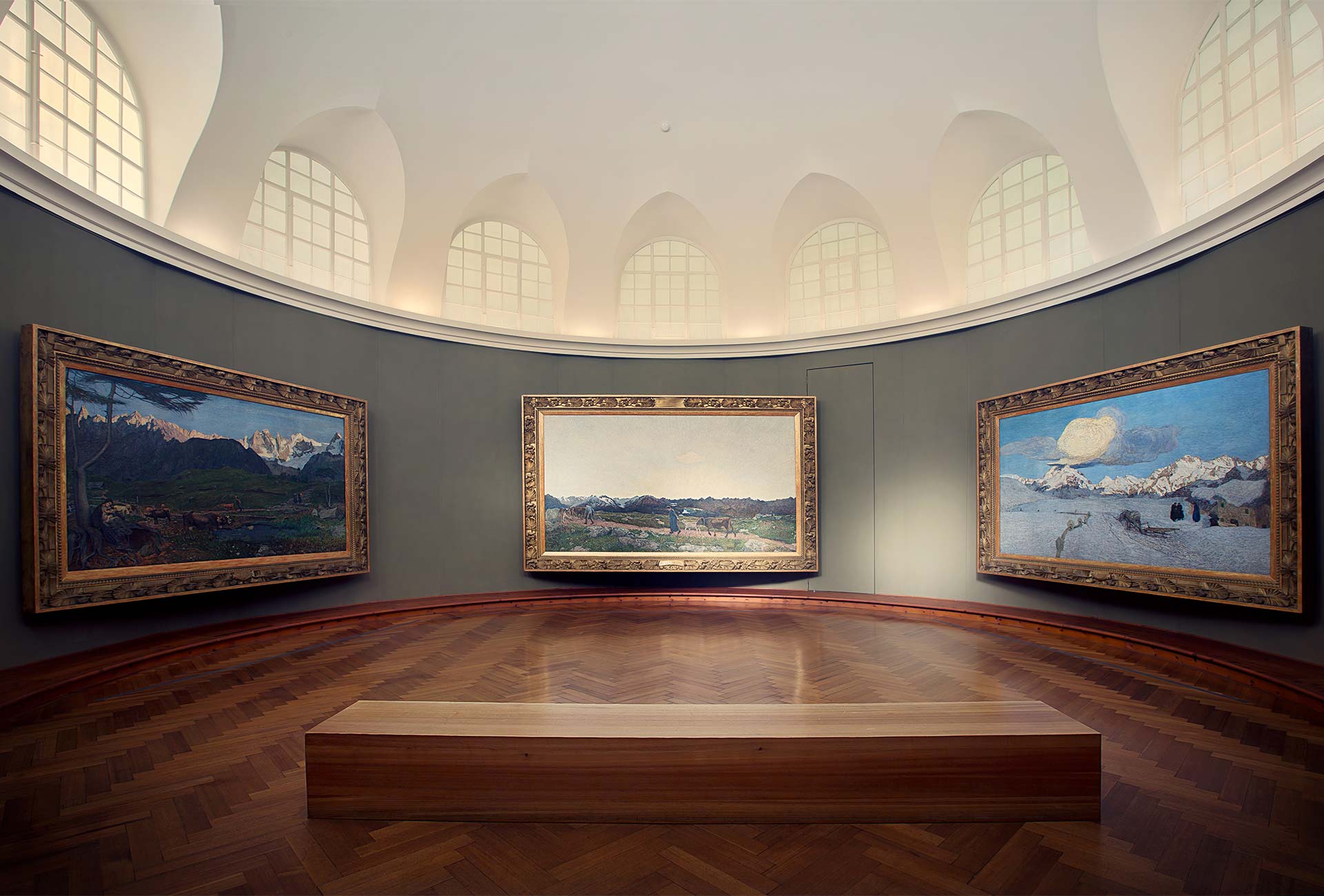 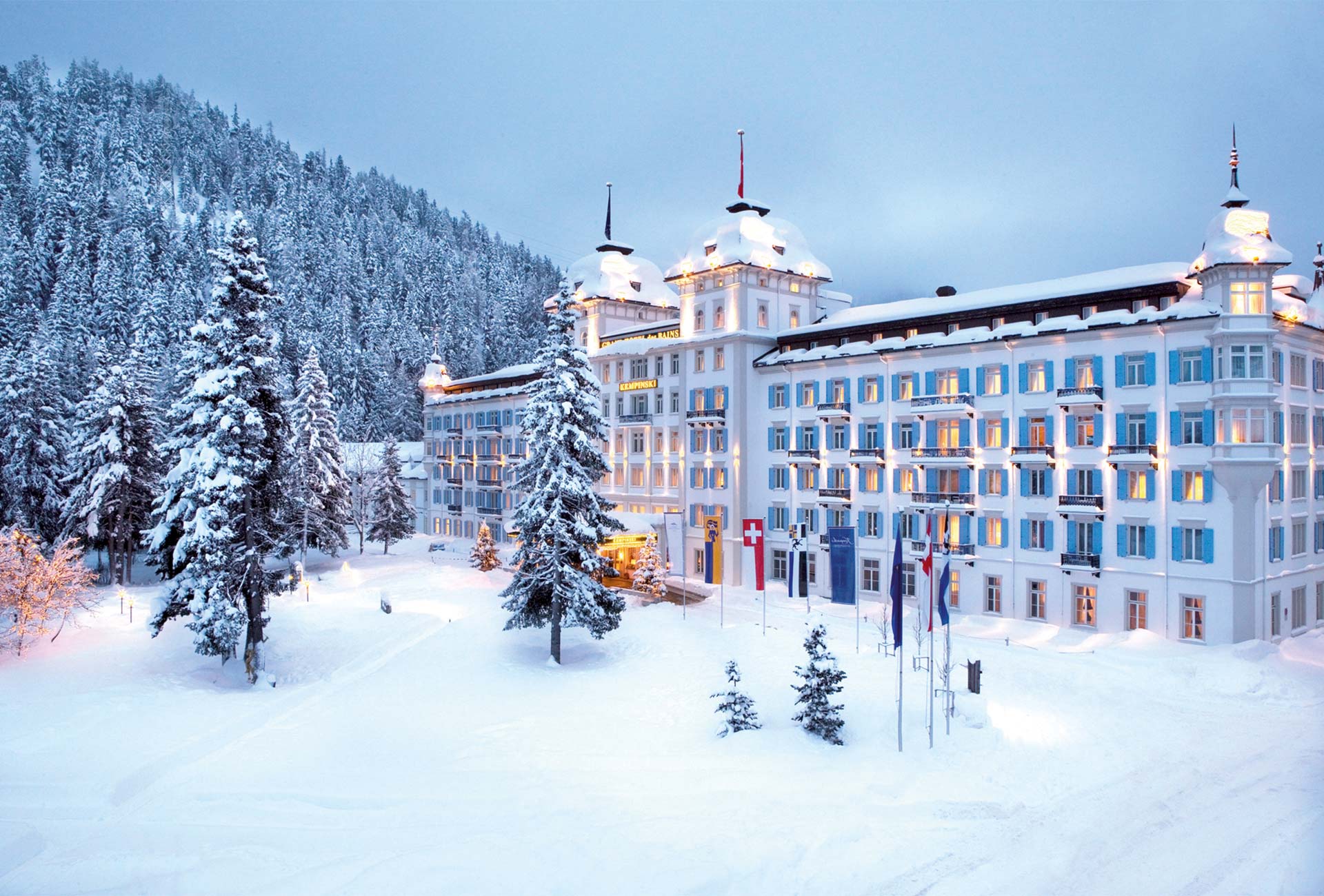 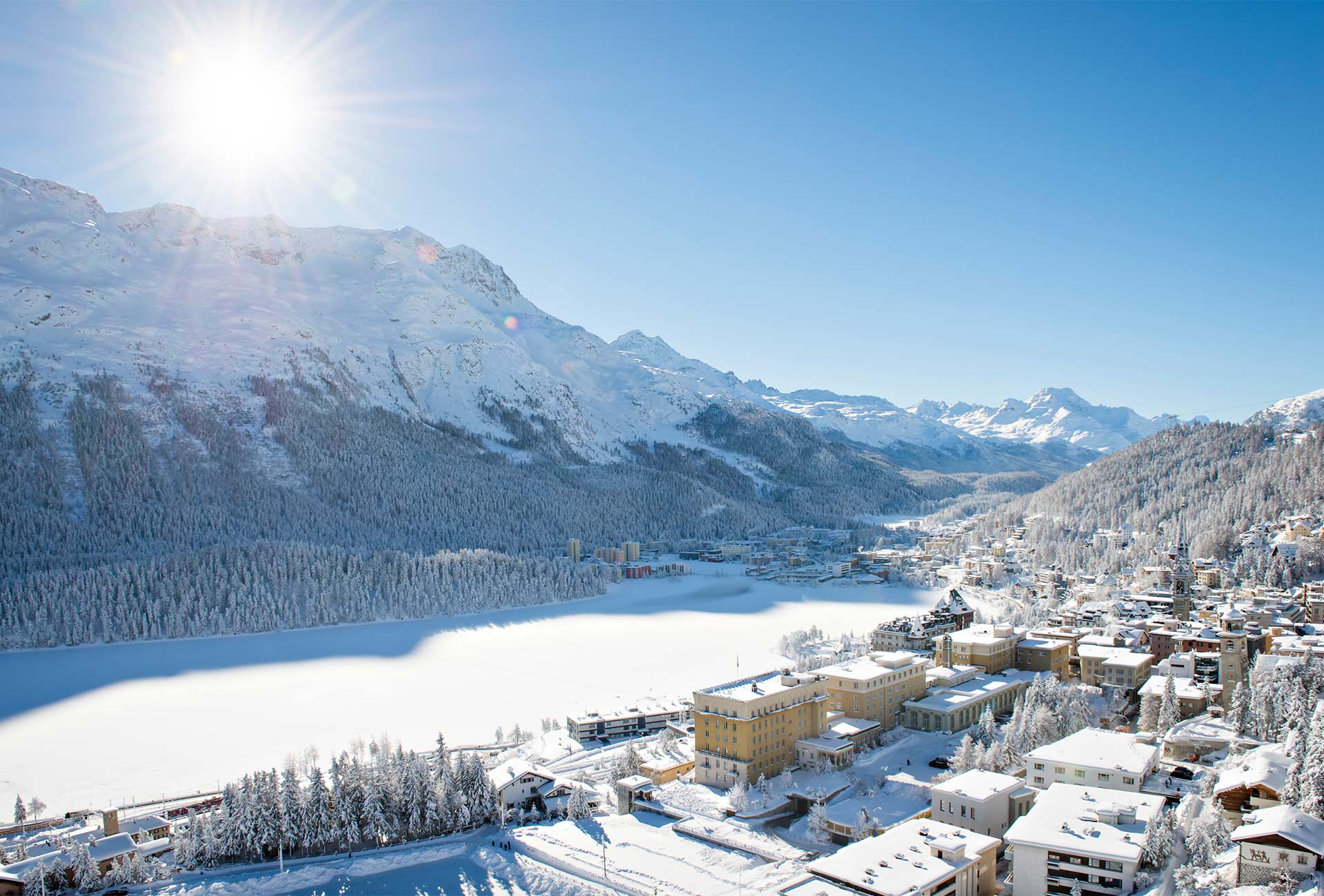 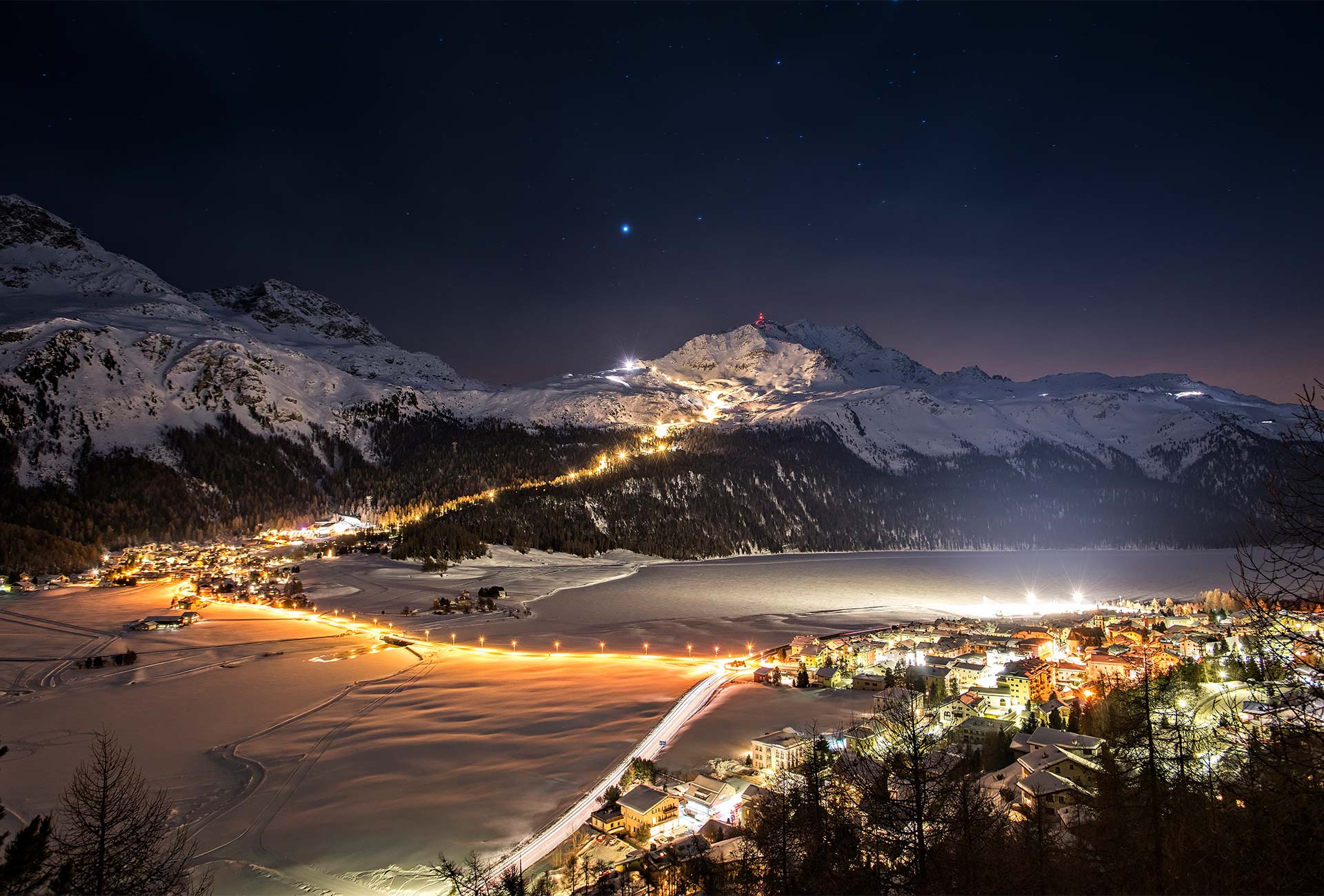 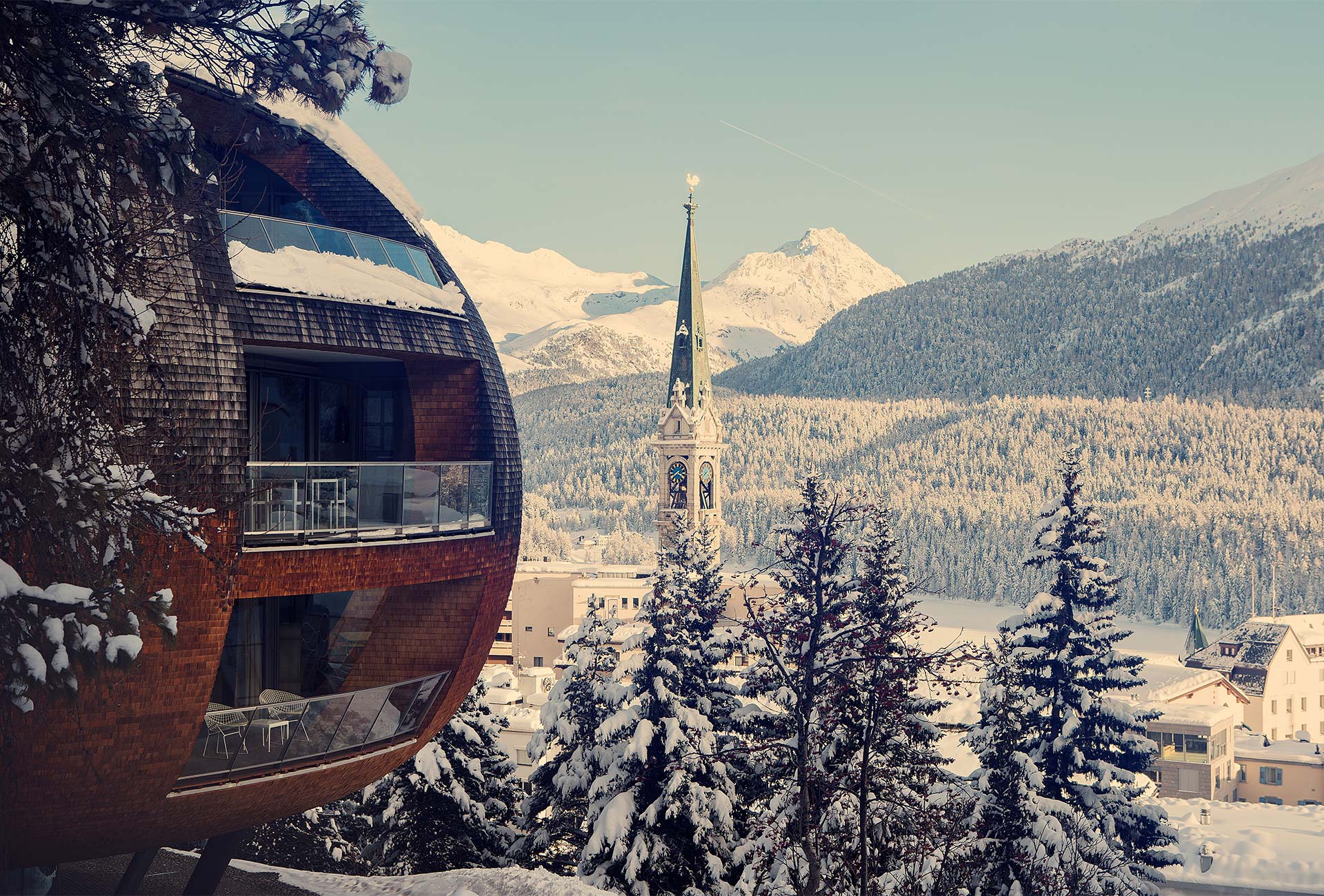 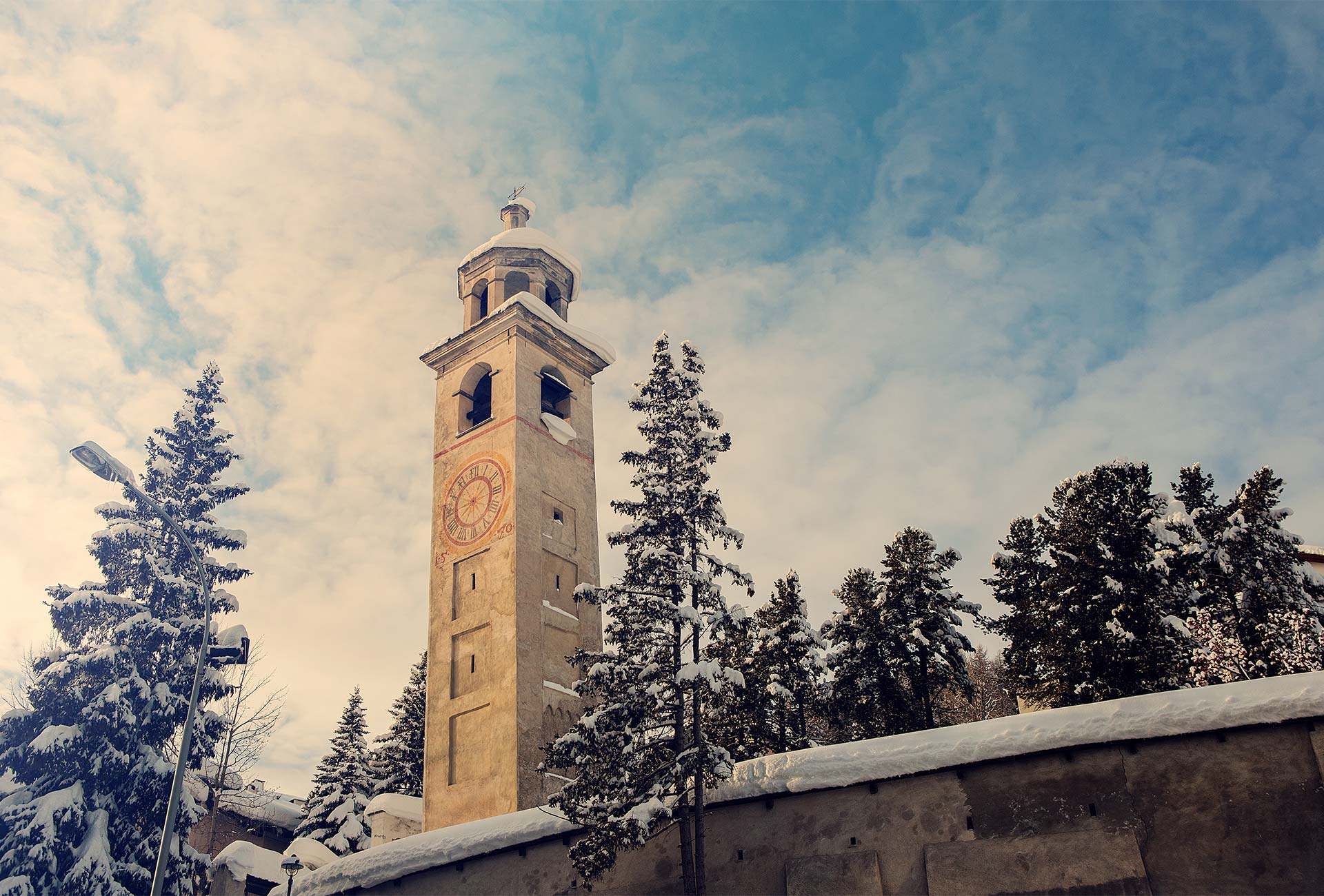 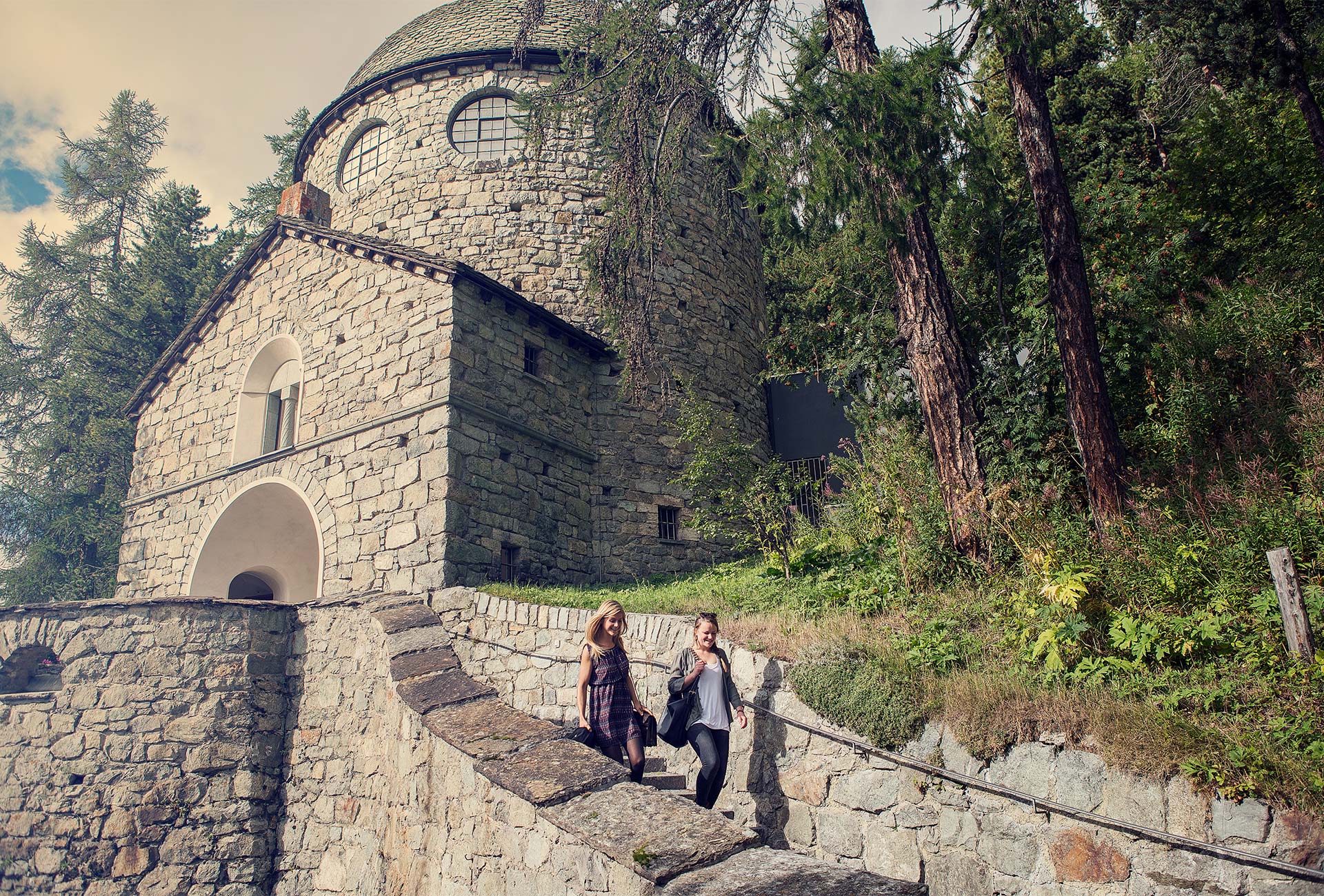 We care for your and our health by implementing the protective measures of the FOPH. You will find the corresponding measures by clicking on the respective Clean & Safe label: